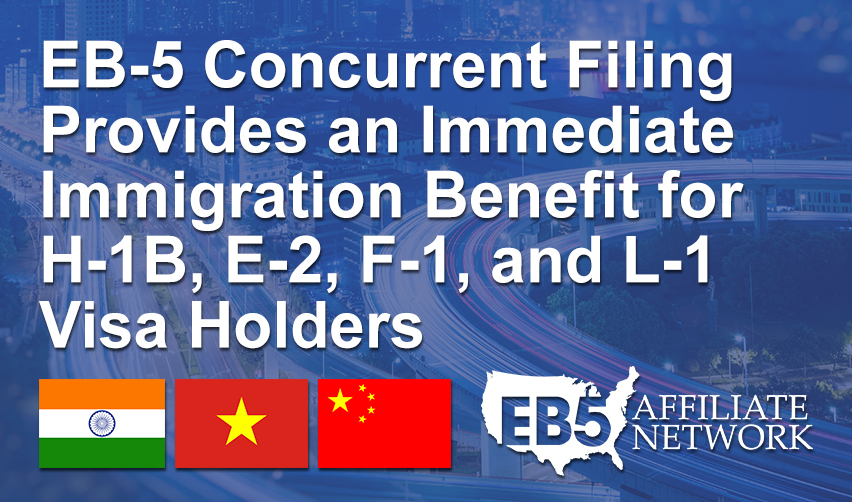 EB-5 Concurrent Filing Will Let Investors Live, Work, and Study in the United States Sooner than Before with an EB-5 Investment

On March 15, 2022, President Biden signed into law the long-anticipated EB-5 reform measures as part of an omnibus spending package. The EB-5 Reform and Integrity Act of 2022 (the “Reform Bill”) also reauthorized the EB-5 regional center program.

Changes to the regional center program take effect on or about May 14, 2022—60 days after the Reform Bill’s enactment. We expect all other changes to be effective immediately.[1] Readers should speak with their immigration attorneys on the matters discussed herein.

One of the most significant changes brought by the Reform Bill is the ability to file Form I-526 and Form I-485 at the same time (“EB-5 Concurrent Filing”). EB-5 Concurrent Filing allows investors living in the United States on non-immigrant visas to apply for adjustment of status when filing their I-526 petitions. We expect that investors who filed their I-526 petitions before the Reform Bill was enacted may also apply for adjustment of status prior to the adjudication of Form I-526.

What Is Adjustment of Status?

Form I-485 allows foreign nationals temporarily living in the United States to switch from one legal status to another. In the case of EB-5 Concurrent Filing, investors are expected to enjoy the benefits of lawful permanent resident status as explained in more detail below.

Who Is Eligible for EB-5 Concurrent Filing?

EB-5 investors born in countries subject to visa retrogression are not eligible for EB-5 Concurrent Filing. Such individuals, however, are still eligible t file I-526 petitions.

Visa availability is published on the U.S. Department of State’s online Visa Bulletin.

EB-5 investors who adjust status from H-1B or E-2 can apply for work authorization that is not tied to a sponsoring employer or investment business. Such investors may work for any employer—or choose not to work at all—without jeopardizing their status.[3]

EB-5 investors in the United States on F-1 visas would be eligible, following adjustment of status, to pause certain restrictive requirements imposed on foreign nationals studying in the United States. While waiting for Form I-485 to be adjudicated, the foreign national’s status would be “pending adjustment.” This pending status is a gray area in which investors are neither conditional permanent residents nor F-1 students.

Under U.S. employment-based visa programs that permit concurrent filing, petitioners are eligible to apply for work authorization and travel permits. While USCIS must clarify that these two applications are available to I-526 petitioners, we assume they will be. These two applications would be approved in advance of the I-485 petition. Once petitioners’ work authorization and travel permits are approved, they may live, work, and attend school anywhere in the United States. Effectively, they would enjoy the benefits of a green card without actually having one.

Additionally, the EB-5 Concurrent Filing process is usually preferable to the consular visa process abroad, which is prone to experience lengthy delays and sometimes unpredictable adjudication.

The EB-5 investor’s immigration attorney files an adjustment of status request and at the same time, also asks USCIS to issue work authorization and travel permits to the investor and his/her family members. View a successful sample adjustment of status request here for an Indian born EB-5 investor based in the US who joined EB5AN’s Higher Ground Direct EB-5 project.

As of July 2020, India no longer has an EB-5 visa backlog. Indian nationals do, however, face lengthy delays with the first three employment-based categories (i.e., EB-1, EB-2, and EB-3). India is at risk of becoming oversubscribed again in the near future. Therefore, Indian H-1B, E-2, and F-1 visa holders considering an EB-5 investment should begin the process as soon as possible.

Example #1: Ramesh is an Indian national in the United States on an H-1B visa. He works as an IT service tech at a large company. Ramesh would prefer the freedom to work in a different position for another company, such as a start-up. His H-1B visa, however, limits him to a certain type of employment position and to companies willing to take on an H-1B worker. Start-ups seldom offer such immigration benefits. EB-5 Concurrent Filing would, following receipt of work authorization, allow Ramesh the freedom to move to a smaller, growing company while waiting for his I-526 and I-485 petitions to be adjudicated.

Example #2: Veronique is a French graduate student in the United States on an F-1 visa. She is studying business but would like to pause her studies. Her visa restricts her from taking a lengthy leave of absence from school. EB-5 Concurrent Filing would move Veronique into a pending adjustment status category and allow her to take a leave of absence without fear of violating her immigration position.

Example #3: Paul is an E-2 investor from Canada who is no longer interested in owning and operating his restaurant. He wants to remain in the United States on a permanent basis but cannot under the E-2 visa. Through EB-5 Concurrent Filing, after becoming eligible, Paul could follow the EB-5 path to gain work authorization and related benefits.

EB-5 Concurrent Filing allows investors in the United States under other visa categories to apply for adjustment of status while filing Form I-526. This new filing option, introduced in the Reform Bill, allows EB-5 investors to enjoy the benefits of lawful permanent resident status while waiting for their I-526 petitions to be adjudicated. For many foreign nationals, EB-5 Concurrent Filing offers a quick solution to living, working, and studying in the United States without the restrictions imposed by the H-1B, E-2, and F-1 visas.

This is a joint article written by Rohit Kapuria, Esq., one of the most well-respected EB-5 immigration attorneys in the industry, and Samuel B. Silverman, founder and Managing Partner of EB5 Affiliate Network.

[1] USCIS must issue new regulations and its interpretation of the Reform Bill within 60 days of the bill’s enactment. Therefore, certain assumptions described herein are subject to change. That said, while EB-5 Concurrent Filing is new to EB-5, it has its precedence in other employment-based visa categories. See https://www.uscis.gov/green-card/green-card-processes-and-procedures/concurrent-filing-of-form-i-485.

[2] Section 245(c) of the Immigration and Nationality Act lists several bars to Form I-485 eligibility. Readers should speak with their immigration attorneys on this matter.