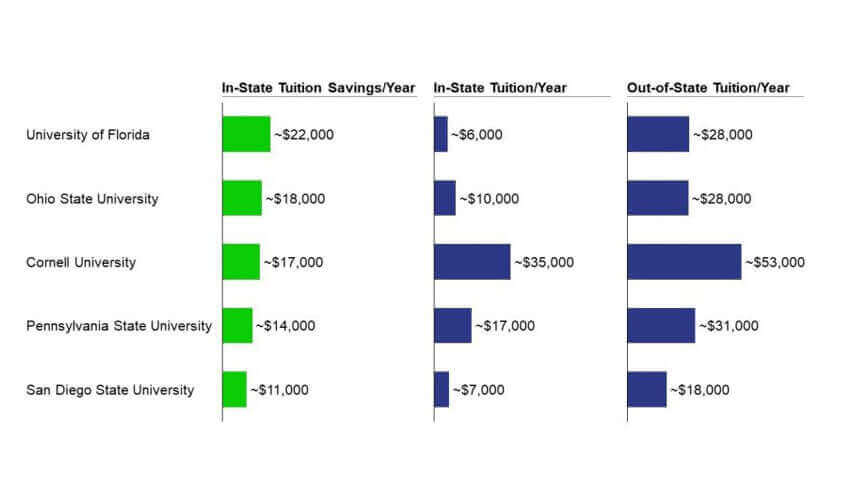 The reasons why foreign investors decide to invest in the EB-5 program are numerous, as each investor’s situation is different, but they all have the same general goal: obtaining a U.S. green card, which grants holders the right to permanent residency in the United States. Upon successfully satisfying the criteria of the EB-5 visa application, which include the creation of 10 new full-time jobs for U.S. citizens or residents, investors apply for an EB-5 visa not only for themselves but also for their spouse and unmarried children under the age of 21.

For investors with children, one of the most enticing draws of the EB-5 visa program is the benefits their children can enjoy when applying to U.S. colleges and graduate schools. U.S. post-secondary education institutions are among the most prestigious in the world, with U.S. schools routinely dominating lists of the world’s top-rated schools. International students flock to the U.S. to pursue the highest-quality degrees in the world, with the number of international students in the United States hitting an all-time high in the 2018/19 academic year.

The children of EB-5 investors enjoy significant advantages in applying to U.S. colleges and graduate schools when compared to their peers in their country of origin. Green card holders are considered U.S. residents, meaning they apply alongside U.S. citizens, not international students. Since the difference in acceptance rates between international students and domestic students is sometimes staggering, the children of EB-5 investors with green cards are granted a significant advantage in terms of college admissions.

U.S. green card holders can be up to 9% more likely than international students to gain admission into a U.S. university. While the acceptance rates for domestic students at top-tier universities are also low, as these schools accept only the top applicants, the children of EB-5 investors with green cards have a 4.5% chance of being accepted into Harvard, compared with the 0.1% chance that international applicants face.

Acceptance rates are not the only way through which EB-5 green card holders stand to benefit when applying to U.S. colleges and graduate schools. The lower tuition rates U.S. residents enjoy may also increase the number of schools an applicant considers, making schools previously deemed too expensive affordable. The rates vary from institution to institution, but many U.S. colleges offer discounted rates to in-state applicants, and green card holders applying to schools in their state of residence are considered in-state applicants.

It is important to note that if you are aiming for the universities at the very top, such as Harvard or MIT, there may be no financial benefits for in-state applicants. However, some schools, such as the University of Florida, offer massive discounts that can help compensate for the large EB-5 investment the family has already made.

Furthermore, if tuition is still too high even after in-state deductions, EB-5 investors’ children have another valuable advantage over international students: They can apply for financial aid through programs such as Free Application for Student Aid (FAFSA). The application process for FAFSA varies from state to state, so be sure to look up the deadline for your state.

Green card holders may also be eligible for grants from the institution itself or for scholarships offered by various entities. Overall, the educational possibilities of green card holders are significantly extended thanks to the financial benefits that they enjoy, making it easier to attain a high-quality education in the United States.

Green Card Holders Have No Restrictions During Their Studies

In addition to the fierce, ever-increasing competition and the sky-high tuition fees, international students also face numerous restrictions, particularly in terms of work. International students are restricted to on-campus jobs, allowed to work off campus in only in limited circumstances. Green card holders, conversely, have all the same freedoms as U.S. citizens, which means they may take full-time or part-time jobs off campus, apply for internships, and apply for postgraduate programs. Thus, while international students have to, in many cases, pay higher tuition fees and have fewer opportunities to earn money, the children of EB-5 investors who hold green cards typically have lower tuition fees and may work freely to help fund their education.

Students who hold green cards also do not have to worry about renewing student visas, unlike international students. In some cases, United States Citizenship and Immigration Services (USCIS) does not issue F-1 student visas for the duration of the student’s program, forcing international students to go through the long, bureaucratic process of renewing their student visa. For green card holders, no extra bureaucracy is necessary.

The EB-5 Visa Makes for a Better Future

People around the world dream of a life in the United States, and the EB-5 visa makes this dream possible for thousands across the globe. In many cases, those who benefit the most are not the principal applicants but rather their children, who may use the EB-5 green card they are granted to more easily gain admission into U.S. colleges and graduate schools while simultaneously paying lower tuition fees than their compatriots and having the freedom to engage in off-campus employment. Thousands of EB-5 investors have already secured a better future for their children through the educational benefits the program can offer.

The overlap between the top countries of foreign nationals studying in the United States and the top countries of EB-5 investors suggests that many families are already taking advantage of this valuable opportunity for their children. The top three countries for international students in the United States are China, India, and South Korea, with Vietnam in sixth place, while the top four countries for EB-5 investors are China, Vietnam, India, and South Korea, respectively. The EB-5 program is a popular way for families to secure a better education and better chances of admission to U.S. colleges for their children.

Previous Post
New USCIS Regulations Bring Drastic Changes to the EB-5 Program and Increase the Importance of Reliable Regional Centers
Next Post
The Benefits of the EB-5 Visa Program for Investors’ Children: Access to the U.S. Public Education System
Menu