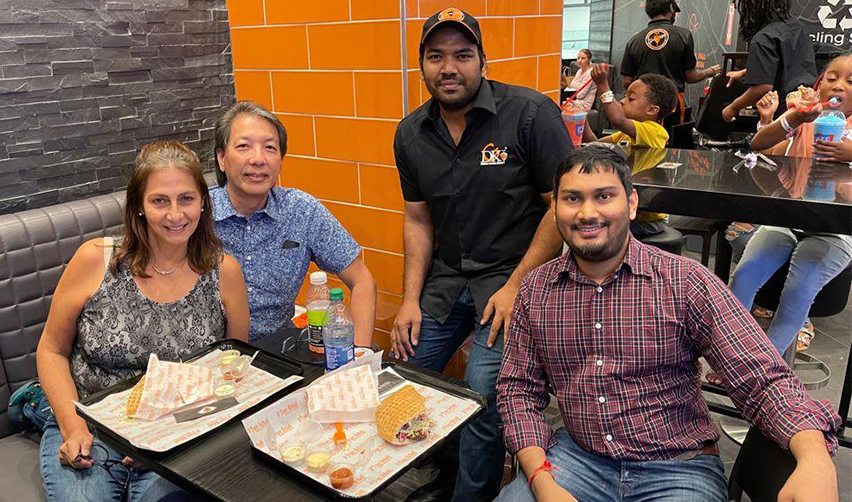 In August 2021, German Doner Kebab (GDK) opened their first location in East Rutherford, New Jersey as part of the American Dream Mall complex. GDK is a European fast-food retailer that has created a healthy and nutritionally balanced approach to traditional kebabs. The restaurant has partnered with EB5 Affiliate Network (EB5AN) to fund the start-up and operation of seven (7) new GDK locations in New Jersey and New York. Shortly after the grand opening of the first location, GDK’s first EB-5 investors visited the location for a celebratory lunch.

Created in 1990, the EB-5 Immigrant Investor Visa has long been a gateway to the United States for foreign nationals living abroad, as well as by those already working or studying in the U.S. on nonimmigrant visas including H-1B, L-1B, and F-1. Thousands of families from all over the world have successfully immigrated to the United States by making a job-creating investment in a U.S.-based business enterprise. The EB-5 program has stimulated billions of dollars of foreign direct investment into the United States and created tens of thousands of jobs over the last three decades.

EB5AN has partnered with German Doner Kebab—a fast-food retailer with hundreds of locations in Europe and the Middle East—to fund the start-up and operation of seven (7) new locations. The kebab restaurant uses lean, succulent beef and pure chicken fillets imported directly from Germany to maintain quality and consistency. The result is a nutritionally sound gourmet food experience that contains virtually no preservatives or additives and can be consumed day or night. With a strong modern brand and the promotion of healthy, fresh, nutritious ingredients that appeals to a broad market, “Doner Kebab” can only continue to grow and succeed.

German Doner Kebab is raising $3,500,000 from seven (7) EB-5 investors to fund the start-up and operational budgets of the seven (7) new locations. The first unit is already open. The remaining six (6) units are to be opened in March 2022. “The diversified EB-5 franchise investment across seven locations makes it one of the best direct EB-5 projects on the market,” noted Sam Silverman, the CEO of EB5AN. “Even if there is an issue with an individual location, the investors’ immigration and financial risk remain limited due to the diversified approach.”

Interested investors should download the GDK presentation here or email info@eb5an.com for more information. EB5AN is also happy to host potential investors for a visit to GDK’s open location in the American Dream Mall.