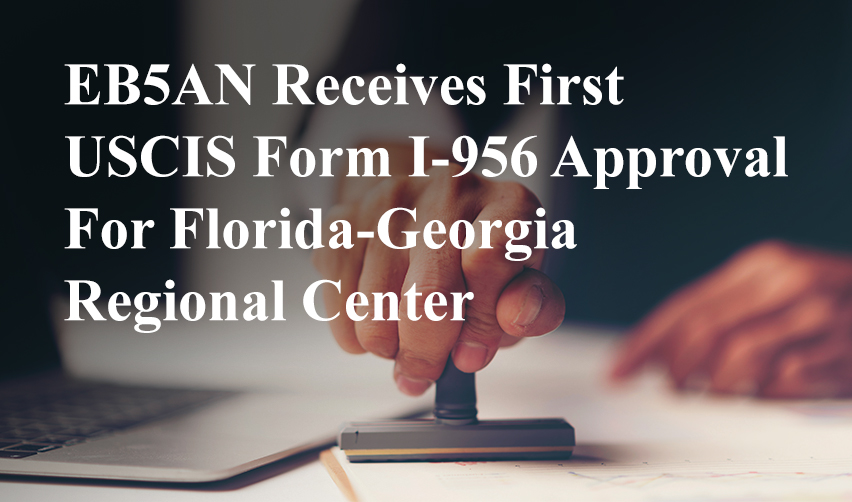 EB5 Affiliate Network (EB5AN) is pleased to announce it has received the first ever approval of Form I-956, Application for Regional Center Designation.

What Did the Form I-956 Application Process Look Like?

What Are the Implications for EB5AN’s Form I-956 Approval?

How to Get in Touch with EB5AN?

Form I-956 was introduced on May 13, 2022, as a replacement for Form I-924 under the new EB-5 Reform and Integrity Act of 2022 (the “RIA”). Under the RIA, all preexisting regional centers that want to maintain their designation must submit a Form I-956 before December 29, 2022. Regional center applicants must demonstrate through their Form I-956 submission that they are compliant with the new standards set forth in the RIA.

What Did the Form I-956 Application Process Look Like?

EB5AN submitted this new form the day after it was released by USCIS. As a best-in-class regional center operator, EB5AN had already implemented policies and procedures that were, in effect, compliant with the RIA. Upon the release of Form I-956, EB5AN was able to quickly modify its regional center policies and procedures to clearly comply with the new standards set forth in the reform legislation.

EB5AN’s regional center application was approved in record time—just five months after filing. Beyond this, USCIS had no questions for EB5AN, required no additional information, and filed no requests for evidence (“RFEs”) with regard to the Form I-956 application.

What Are the Implications for EB5AN’s Form I-956 Approval?

Approval of EB5AN’s Form I-956 means USCIS has approved of EB5AN’s updated policies and procedures. Compliance with the RIA means different things for different EB-5 stakeholders.

The RIA created uncertainty for ongoing projects. The question of how existing regional centers would maintain their designation was not settled until months after the RIA went into effect. This uncertainty increased the immigration-related risk to EB-5 investors.

Investors in all of EB5AN’s regional center projects can invest with confidence knowing that EB5AN has secured the first of its new Form I-956 approvals without any problems or delays. EB5AN expects to receive approvals for all of its other regional center applications in the coming days.

For Future Form I-956 Applications by EB5AN

The approval of EB5AN’s first application for regional center designation under the RIA demonstrates that EB5AN’s policies and procedures are considered compliant by USCIS. Since all future Form I-956 applications by EB5AN are supported by the same policies and procedures, EB5AN anticipates no issues securing designation for all of its regional centers under the RIA.

For Developers Looking for Regional Centers to Rent

With its first Form I-956 approval, EB5AN is ready to begin renting regional center services to developers who need immediate access to EB-5 funding.

How to Get in Touch with EB5AN?

For more information on renting a regional center, or for help filing Form I-956, please schedule a one-on-one call with EB5AN or send an email to info@EB5AN.com.